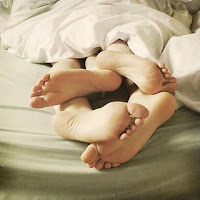 I know what you're already thinking - who's sex life doesn't take a turn for the worse after having a baby.  In the early stages this is definitely true, your body has been through so much, emotions are running high, hormones are doing whatever the hell they feel like doing and you have a tiny baby hanging off your breast most of the time - I know I had the 'closed for business' sign around my neck for some time after the births of my little ones.

But.... sooner or later you do feel like revisiting that part of your life, when you have finally had more than a couple of hours sleep at night, your 'bits' are feeling a little more normal and sometimes when you just cant fight your partner off any longer you are ready to give it a go.  You had a sex life before children and you can have one afterward - maybe a little less spontaneous one but it is an important part of a your relationship and you are allowed to desire and enjoy each other again.

You set the scene (door closed) some cuddling and kissing follows then you get down to business, you've done it a hundred times together before so it really shouldn't be that much different... should it??? So far, so good, he's into it, you're into it, everything is where it used to be but no matter how hard you try that elusive orgasm, the big 'O' that had never been any trouble to find before has left the building!  So not only have you given your body up for this baby for nine months they have now taken away your sexual enjoyment too - you're frustrated, he's got no idea what he's doing wrong and it all just feels like a little too much effort.

Let me tell you a little about the pelvic floor's role in reaching orgasm.  Your pelvic floor muscles are responsible for the amount of sensation you feel during sex and strong firm muscles are said to have more nerve endings than weaker muscles and therefore meaning more sensations for you.  More importantly in order to achieve orgasm your pelvic floor needs to contract around your clitoris to stimulate and there for reach that 'O' so wonderful place you are looking for.

The pelvic floor is stretched and often traumatised during childbirth, I find some mums who train with Body Beyond Baby often don't realise they have a weak pelvic floor until after I have suggested that they undergo a Real Time Ultrasound assessment 'just to make sure everything is okay' before we move into higher impact and more strenuous exercise.  What we sometimes find here is that women that thought their pelvic floor was fine might not be okay and may be compensating for this weakness by using other more superficial muscles, which, in turn can eventually lead to other complications, aches and pains (not to mention an even weaker pelvic floor) down the track.  Having delved a little deeper we discover that some of these women have not achieved orgasm since having their baby, but  they haven't made the connection between a weak pelvic floor and lack of fun in the bedroom due to the fact that they have no 'obvious' symptoms of a weakened pelvic floor.

I spoke to Jo Murdoch of The Physiotherapy Clinic in as to what her best advice is to anyone that thinks this might be the case for them. Jo said; "Recognise the inability to reach orgasm as a sign your pelvic floor is not functioning as well as it should. Therefore have it assessed by a women’s health physiotherapist and get yourself on a pelvic floor retraining program."

So ladies, don't sit in silence, go and get a quick pelvic floor check up and reclaim your sex life - and while you're at it please share this article with your mummy friends - it's not the kind of conversation many of us have over our mothers group coffee but it's definitely one worth having, for everybody's sake - I'm sure they will thank you for it!
Posted by Jen Dugard at 9:48 AM

Fantastic for you to bring this subject up ... we don't like to talk about our (lack of) great sex... but how wonderful to be able to have that again. Great work Jen for spreading these great messages through your blog
mishx