FYSB Before and After AND Q&A with our winner Sarah

Today we chat to Sarah - overall winner of our first ever Find Your Summer Body - 8 Week Challenge.

What initially made you sign up to the 8 Week Challenge?

I wanted to lose the weight I had put on during my pregnancy.  I felt this was a good way to do it as the sessions are aimed at post-pregnancy.  I wanted to kick start my exercising again and the challenge looked like a great way to do that.


What were your initial goals and did you think you would reach them?

These were my goals as I emailed to Jen prior to the challenge:
Goal 1 - Currently weighing in at 76.9kg, my aim is to lose 1kg a week to get to a weight of 68.9kg.  This is close to my pre-pregnancy weight of 66kg, which I plan to continue to achieve after the 8 week challenge.

Goal 2 - To fit into my pre-pregnancy jeans, currently they just go over my hips but don't go anywhere near zipping up. They are a size 12. This is important to me because it is a very good indication that I have my figure back from before I had Harry.

Goal 3 - At the test I was able to do 13 push-ups on my knees, by the end of the 8 weeks I would like to be able to do at least 10 on my toes. This is important to me as it is an indication of strength I have built up over the 8 week period.  I have never been very good at push-ups so whilst this isn't a great number it will be an achievement for me.

I felt the goals I set myself were achievable as long as I remained committed to the challenge until the end, attended all the sessions and ate healthily.

What were the easiest and most challenging aspects?

Easiest – I adjusted to the healthy eating easily, mainly because of the support from my husband who ate what I ate and didn’t tempt me with foods I was trying to avoid (cakes, ice cream, etc)

Most Challenging – going to the Sunday steps session every week, it got to about Wednesday every week and I would start to dread the steps session coming up that weekend! Even though they are the most challenging, they are also the most rewarding once I had finished, I went home on such a high afterwards and felt really good, I also felt they had the most impact on my weight loss.

What were your favorite and least favorite bits?

Favorite – I liked the feeling at the end of a session, particularly the weekend sessions, when I knew my exercise was done for the day and I would race home to see Harry and Paul (my husband), it was such a good feeling. In terms of the sessions themselves; I liked the Saturday sessions which were a bit different to the weekday ones. One week we played stuck in the mud, which was fun, and also I liked working on the benches and running around the trees.

Least favorite – was doing the sessions in the cold and rain. There was one Saturday session where it rained heavily, which actually turned out quite fun, but there were a few sessions where as well as being wet it was windy and cold, and I wasn’t a big fan of those sessions - but we conquered them anyway!

How many sessions per week did you exercise to achieve your goals?

Four times a week, two during the week and the weekend sessions, I attended every session I had booked into throughout the challenge.

Did you have to change your diet a lot?

In some ways, yes but not in others. Yes because Harry was only 2 months when the challenge started so I was still eating for two! I really had to cut down my portion sizes and this was the biggest change for me. Initially I found this hard, as I was breastfeeding and had to increase my calorie intake to allow for that.  I didn’t have to change the kind of foods I ate too much though, as we already ate a lot of wholemeal foods, bread, pasta, rice and fruits and veggies, so I knew what I had to do.

I used foodlog for the first few weeks to ensure I was on the right track.

Do you feel like your diet and exercise changes were sustainable?

To a certain degree – yes. Exercising 4 times a week worked well – because you pretty much have every other day off which is easy to put into a long term plan.

With the diet I cut out all bad things except I allowed myself a meal off a week, I didn’t always stick to this but for the main part I did, and so some of my favorite things did not get eaten or drank. For example, no ice cream or no smoothies! I don’t want to cut these out completely long term, however, I do know not to go mad on these types of things!

What else did you gain from your challenge experience (apart from diet and exercise)?

I felt like I got my body back.  Before, I had lent it to Harry and now it is mine again! The challenge was also good to have an hour to myself to be 'Sarah' again rather than 'Mummy', whilst still having Harry close by.

I also made some good friends who were also doing the challenge with me, which really helped me along the way, and was good motivation.

What would your advice be to a new mum thinking about doing the challenge?


I would definitely advise them to do the challenge.  I would advise them to try and commit themselves 100%, I was lucky with Harry because he is such a good boy.  I have had very few sleepless nights, although he always seemed to know when the steps session was as he would wake more that night! I would say to remember that it is only 8 weeks, but could be an opportunity to get yourself in a much healthier routine that is maintainable after the challenge is over.

Sum up your challenge experience for us

I signed up to the challenge thinking that it would be a kick start to my weight loss and getting my figure back. I never thought I would exceed my weight loss goal and I am amazed at my before and after photos, I can’t believe how different I look. I am really pleased I took up the challenge, and feel really good.

And here are Sarah's before and after pics: 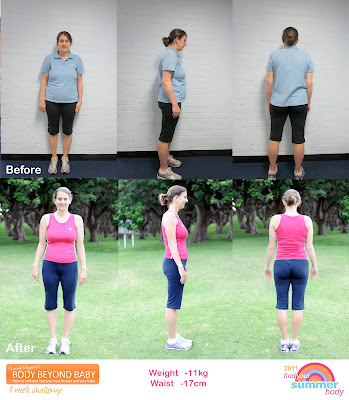 A HUGE congratulations to Sarah and thank you for sharing your thoughts and experience with us - I am very much looking forward to what Sarah will achieve in Round 2!
Posted by Jen Dugard at 10:30 AM