What comes inside an Easter egg? 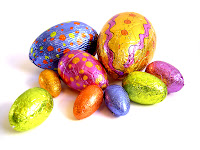 Easter is nearly upon us - I can't believe how fast time flies.  I remember as a child how time used to take forever to go by and you were always wishing the days away waiting for an exciting event, a holiday, birthday or Christmas.... not any more.

So with Easter comes Easter eggs and we all know what is inside that shiny egg shaped wrapping don't we??

Marley had an Easter egg hunt at kindy this afternoon and I received a phone call (as they know my stance on the types of food I would rather he eat - or not) asking me if he was 'allowed' a little chocolate egg.  I was at the cash register in David Jones and was caught a little off guard, I ummed and aarred for a few minutes, asked what they were, how many they were being given (two) and if there was any alternatives, feeling torn between not wanting my child to feel as though he was missing out but really deep down not wanting to say yes.  In the end I said "okay maybe just give him one".....putting the phone down, swearing and being given a strange look by the sales assistant I felt a little deflated that given Marley's only real taste of chocolate to date was about three smarties at his second birthday party he was now going to be given chocolate when I really didn't want him to be.... I had succumbed to peer pressure.  I am not stupid, I know that there will come a time, and that time is coming nearer, that he will be presented with more junk food - he will know what mini M&M's are rather than running his fingers through the bowl and exclaiming how colourful they are (as he did at the last birthday party we went to) he will ask for lollies at the shops or chocolate in the supermarket cue and we (my husband and I) will have to decide on the way forwards.....we will talk about everyday foods and sometimes foods and aim to keep him eating as cleanly and as healthily as possible.

So, I arrived at kindy to pick Marley up this afternoon, my mum was with me and I was telling her about the phone call and that I felt a little disappointed that I had 'caved'.  No sooner are we through the gate when we were met by Clare, one of Marley's teachers, who told us that when the children were being told about the Easter egg hunt she held up a foil covered  egg and asked them all what was inside......most of the children yelled out "CHOCOLATE" but Marley, he shouted "CHICKS" and it was then she decided to over rule my phone call and give him some crackers as the other children ate their chocolate..... he was non the wiser, enjoyed his snack and was happy to tell me that he had crackers after his Easter egg hunt.  I am grateful to Clare for being in the situation, judging what was best and knowing that chocolate (or any junk foods) are not readily available in our house.   I asked Marley what chocolate was a few weeks ago and he replied "something I don't have Mummy"..... mean some might say, overkill others but saying no to certain foods is no different than saying no to Daddy's beer - there will come a time that he will try it but, for now, for us, this is not that time.

P.S. we will be having our own little Easter egg hunt a week on Sunday but I have bought little plastic eggs that can be cracked in two and little gifts put inside.  I am sure he will enjoy that as much if not more than the chocolate version and there will be no sugar high (or crash) in our house.  Happy Easter