April 13th 2013.  Numbers which are unlucky for some… but not the Tough Mums, who survived (mostly unscathed) the epic 20km torture obstacle course known as “Tough Mudder”. 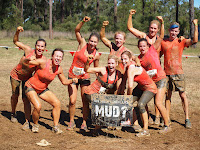 The Tough Mum Team LOVE's their obstacle racing events, but it is fair to say, we were all pretty nervous arriving for this one.  Some dreamed about it the night before, some tried to get lost on their way (yeah, nice story guys) but we all turned up!  These nerves were not eased when our usual teammate Lauren, who wasn’t running but instead was working medical at the event, regaled us with details of the various injuries sustained during the morning…. O. M. G!

Well, we shook off those fears, took our nice bright outfits, and hit the starting area.  An awesome guy psyched us up with hardcore music, chants, and promises to help and look after our fellow competitors.  This challenge is not about the time on the clock, its about teamwork! Helping each other conquer the course, and finishing with our heads held high.

And then, with a sea of fellow mudders  leaping through the orange smoke, we were off! Our team ran together and tackled some amazing obstacles… Dark tunnels, ice baths, leaping over trenches, crawling through mud and under barbed wire, dragging our bodies through the water beneath a cage, and of course our favorite – the electric eel!

As suspected, 20km was no walk in the park.  Its amazing how organisers can get so much uphill into a circular course!...  Or maybe it just seemed that way.  Lets not forget the sneaky hidden tree roots designed to trip us up so spectacularly.  My face certainly hit the dirt once or twice, as did some others who I won’t mention by name (Hi Amy!).  But we picked ourselves up laughing and carried on.  As did the ladies with twisted ankles and blisters.  Poor Charlotte stopped to empty the ‘rocks’ from her shoe to find they were actually giant blisters.  Well a bit of foot taping later and off she continued.  Great effort!

We found our size actually helped us along the way.  Although the vertical challenges were tricky, everything in small confined spaces we found to our advantage.  The Tough Mums also tackled each obstacle strategically.  Electric eel was slow and wriggly to try to avoid getting shocked (moderately successful).  Trainer Jen channelled her inner Catherine Zeta Jones to gracefully progress through the obstacle and avoid the wires, before a big lumbering man nearly crawled straight over the top of her, roaring as he was repeatedly zapped.

Strategy also came into play when we hit the Mud Mile.  We debated whether to get into the muddy trench before trying to climb the first slippery mud pile, or try to leap onto it like some other competitors… then we watched as one person jumped and slammed their face straight into the wall.  Clinging to the mud, and almost certainly sporting a broken nose, and potential Angelina Jolie lips, she took a moment and continued on. Wow!  Amazing and courageous!  …but feeling her pain, we quietly slid into the water and took the obstacle in a pain free fashion.

But the Tough Mums also had their own injury.  Celine, always agile and strong, took a fall from the 12 foot Berlin Wall straight onto her shoulder.  We crowded fearfully around her, peering closely to see if there were any bones protruding or strange deformities present… but she didn’t like that much and up she got, dusted herself off, and used her Tough Mum shirt as a sling for the rest of the race.  Hardcore!

Best Tough Mum achievement was seen at ‘Walk the Plank’… we climbed up the ramp like a herd of mindless sheep and found ourselves facing a 15 foot drop into water below.  Well, it doesn’t seem so bad when you are looking from the ground, but at the top it was scary!  … ‘I think I can see my house from here!’ And this was where we saw Charlotte face her fear.  She was at the top for a while, counting to three a few times but not quite ready to go.  There were even very attractive lifesavers in the water below, as well as climbing up to jump alongside her (nice move Charlotte), but still she wasn’t quite ready.  Then finally, with a yell of determination, and with the entire crowd below chanting her name like a rockstar… she leaped!  Amazing moment.  Best of the day!

We finished the event strong, with some of the best obstacles saved til last… Funky Monkey, Everest, and of course ElectroShock Therapy! We smashed them all, crossed the finish line, and then proudly posed for photos covered in mud and sporting our TM Headbands!

The final challenge of the day:  finding where I parked my car!  But that’s another story…Awesome event, fantastic day, and amazing achievements by the whole team. Well done Tough Mums… Jen, Amy, Della, Danette, Cori, Charlotte, Celine (…and me too) . We totally earned our post race beers , burgers and  headbands.  Once again we wear our bruises with pride, marveling at their spectacular colours, and tell war stories of our epic day.

Totally ready to do it all again…See you in October Tough Mums!!
Posted by Jen Dugard at 12:24 PM