So where DO burpees come from?

I was asked the other week who (in their right mind) invented burpees - one of my lovely clients, Emma, did a quick Google search and found this info from Wikipedia.... so for those of you losing sleep at night wondering where the burpee came from or even what a burpee even is here's your answer: 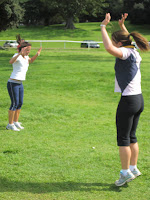 From Wikipedia, the free encyclopedia


The burpee is a full body exercise used in strength training and as aerobic exercise. It is performed in five steps:
Variations on the traditional burpee:

Origin
According to the Oxford English Dictionary, the exercise was named in the 1930s for American psychologist Royal H. Burpee, who developed the Burpee test. Consisting of a series of the exercises performed in rapid succession, the test was meant to measure agility and coordination. It is not clear whether the exercise itself was invented by Burpee, or if his test merely popularized it.
Maybe we will be introducing a few of those variations into our sessions......and for those who previously missed in here's a great little video of my son, Marley performing his own burpee.